[Australia] is under an obligation to:

- Provide [Mr Leo] with an effective remedy, including reimbursement of any legal costs incurred by him, together with compensation

- Publish the present Views [Leo v Australia] and circulate them widely in accessible formats so that they are available to all sectors of the population.

Given “the far-ranging impact of the violations found in the present case,” the Committee reiterated the urgent recommendations to Australia in its Concluding Observations of 2013, adding the following non-repetition measures:

(i) Amend Part IIA of the Criminal Code of the Northern Territory and all equivalent or related federal and state legislation, in close consultation with persons with disabilities and their representative organisations, ensuring compliance with the principles of the Convention and with the Committee’s Guidelines on article 14 of the Convention;

(ii) Ensure without further delay that adequate support and accommodation measures are provided to persons with intellectual and psychosocial disabilities to enable them to exercise their legal capacity before the courts whenever necessary;

(iii) Allow the exercise of the right to live independently and be included in the community by taking steps to the maximum of its available resources to create community residences in order to replace any institutionalized settings with independent living support services;

(iv) Ensure that appropriate and regular training on the scope of the Convention and its Optional Protocol, including on the exercise of legal capacity and access to justice by, and avoid using high-security institutions for the confinement of persons with intellectual and psychosocial disabilities, is provided to staff of the Review Board, members of the Law Reform Commission and Parliament, judicial officers and staff involved in facilitating the work of the judiciary.

Mr Leo is an Aboriginal man from Ernabella in the Anangu Pitjantjatjara Yankunytjatjara (APY) Lands in the remote north-west of South Australia.1 He has epilepsy, mental illness and intellectual and psychosocial disability arising from a brain injury.

In August 2007, aged 26, while living with family in Alice Springs in the Northern Territory (NT), Mr Leo was abusing alcohol and failing to take his medication regularly. Suffering an apparent psychotic episode, he pursued and assaulted a woman on the street, causing her minor injuries and significant mental distress. Mr Leo was arrested, charged with common assault and remanded in a maximum-security prison.

In May 2008, a jury found Mr Leo not guilty due to his mental impairment. However, the NT Supreme Court determined that Mr Leo should not be released unconditionally. In December 2008, the Court placed a Custodial Supervision Order on Mr Leo, under which he was to remain in prison for 12 months, a sentence he might have received had he been convicted.

The decision was reviewed by the Court in November 2009, which ordered that he remain in custody. A further review was commenced in March 2012, but was never completed.

Mr Leo ultimately remained in maximum-security prison for a total of 5 years and 10 months, or nearly 6 times longer than if he had not been disabled, had stood trial and been convicted.

Though unconvicted, he was imprisoned with convicted men and alleges he was subjected to violence from other prisoners. He was also held in solitary confinement ‘frequently and for long periods’.

While imprisoned, he was given ‘very limited or no access to mental health services necessary for the stabilisation of his mental condition and his recovery, or to habilitation and rehabilitation programs necessary to develop his communication, social and living skills. As a consequence, [his] mental health and social functioning deteriorated and he became more dependent and institutionalised.’

In June 2013, Mr Leo was transferred to Kwiyernpe House, a new, ‘high-security prison-like facility’ adjacent to Alice Springs prison, built to provide ‘involuntary care and treatment of persons with disability’ under the terms of the NT Disability Services Act.2 He complained to the Australian Human Rights Commission in 2014 that conditions there were also ‘inappropriate’, raising complaints under both the International Covenant on Civil and Political Rights and the CRPD.3

In September 2013, he complained to the UN Committee in the Rights of Persons with Disabilities.

In September 2014, the President of the AHRC concluded her investigation into Mr Leo’s complaint, finding violations of his rights under CRPD art 14(1), 19, 25, 26(1) and 28(1). She made 7 recommendations to both the Australian and NT Governments to ensure effective individual remedies and systemic reforms. She recommended the NT “take immediate steps” to house Mr Leo in the “least restrictive” appropriate arrangements and “plan to progressively move [him] into the community along with necessary support services.” She found that detention should be a last resort for people with cognitive impairment who have not been convicted of an offence, and where it occurs, it should be “for the shortest appropriate period of time in the least restrictive appropriate environment” with “appropriate advice and support” for the person detained, while an adequate range of disability services and more appropriate forms of accommodation are made available, including “secure care facilities and supported community supervision.”

The Australian Government rejected the AHRC’s findings, claiming the Commission, in hearing the complaint, acted outside its jurisdiction.

In November 2016, after more than 3 years in Kwiyernpe House and a total of more than 9 years of indefinite detention, Mr Leo moved to a community residence, where he is supported at all times by 2 disability workers and has taken up occupational and educational activities.

Mr Leo maintains the NT Criminal Code violated his right to equality before the law by leaving no provision for a court to make reasonable adjustments to enable him to exercise legal capacity.

Mr Leo alleged he was arbitrarily deprived of his liberty – for far longer than any sentence that might have been imposed had he been tried and convicted.

By transferring him from the prison to Kwiyernpe House, rather than providing him with adequate housing and ‘support[ing] his inclusion and participation in the community’, Mr Leo alleged the NT violated his right to live independently and be included in the community (art. 19). He alleged the inadequate mental health and disability services available to him throughout his imprisonment also violated his right to health (art. 25). In all, he alleged breaches of his rights under articles 5, 12, 13, 14, 15, 19, 25, 26 and 28.

Responding to Mr Leo’s communication, the Australian government agreed that detaining someone on the basis of their disability alone would violate CRPD art 14. It conceded that the NT Criminal Code ‘is likely to disproportionately affect’ people with disability, but maintained ‘such differential treatment is legitimate’ (para 4.11) and reiterated the Supreme Court’s conclusion that there was ‘no practical alternative’ to keeping Mr Leo in custody (para. 4.3).

The Australian Government claimed it was progressively realising its human rights obligations to the maximum extent of its available resources,4 citing Kwiyernpe House as a new, purpose-built detention facility – built in part to accommodate Mr Leo specifically – where he received ‘a very high level of disability-related care and support services’ (para. 4.21), including involuntary treatment, at times. Australia told the CRPD that the same level of ‘care, supervision and disability-related services’ would not be available to Mr Leo were he to live in the community.

The Committee on the Rights of Persons with Disabilities found that the Australian Human Rights Commission’s findings in relation to Mr Leo’s complaint were unenforceable and ‘can therefore not be considered as effective remedies’ – also noting that Australia and the NT lack any bill of rights (para. 5.3).

Disability must never be grounds for denying legal capacity (para. 8.6). The Committee found that Australia did not provide – or consider providing – Mr Leo with the support or accommodation he needed to stand trial, exercise legal capacity and access justice, in violation of articles 12(2), 12(3) and 13(1). Mr Leo was deprived of his right to a fair trial and of the equal protection and equal benefit of the law, in violation of articles 5(1) and 5(2).

People with disabilities must not to be obliged to live in a particular living arrangement on account of their disability. Making the provision of public sector mental health services conditional on people with disabilities living in an institution constitutes differential treatment on the basis of disability and, as such, is discriminatory. The Committee found that Mr Leo’s confinement to Kwiyernpe House for over 3 years was such a circumstance, constituting a further breach of article 5.

Liberty and security of the person is one of the most precious rights to which everyone is entitled. By detaining Mr Leo without a criminal conviction, but on the basis of potential consequences of his disability, Australia ‘convert[ed] his disability into the core cause of his detention’, in breach of article 14(1)(b), according to which “the existence of a disability shall in no case justify a deprivation of liberty.”

Governments are in a special position to safeguard the rights of persons deprived of their liberty owing to the extent of the control that they exercise over such persons. Government authorities must pay special attention to the particular needs and possible vulnerability of people deprived of liberty, including because of their disability. Mr Leo was held in maximum security, at times with convicted prisoners, at times in solitary confinement and at times subjected to involuntary treatment.

Indefinite detention can have ‘irreparable psychological effects.’ Mr Leo was detained for over 9 years ‘without having any indication at to the duration of his detention.’ The Committee deemed his indefinite detention amounted to inhuman and degrading treatment, in violation of article 15.

Note that while the UN Committee did not uphold Mr Leo’s allegations under articles 19 (independent living & community), 25 (health), 26 (habilitation and rehabilitation) or 28 (standard of living), the Australian Human Rights Commission did.5

The Australian Government is obliged to advise the CRPD in writing by 29 February 2020 of any action taken in response to the Committee’s recommendations.

Domestic developments while Mr Leo’s case was before the Committee

In 2015, while Leo v Australia was before the CRPD, Australia’s Department of Social Services funded a 2-year interdisciplinary research project undertaken at the University of Melbourne and University of New South Wales called Unfit to Plead. It sought to ‘develop practical and legal options to help ensure that accused persons with cognitive disabilities can participate in criminal proceedings brought against them on an equal basis with others.' The project assessed the impact of embedding disability support workers within community legal services and found that,

'a relatively modest support intervention at a crucial point in criminal justice proceedings can improve the timeliness and quality of outcomes for accused persons with cognitive disabilities, and potentially provide significant cost savings to government.’6

In 2016, a committee of Australian Senators undertook an inquiry into the issues raised by Noble v Australia, making a series of recommendations to all Australian governments to prevent the indefinite detention of people with disability. 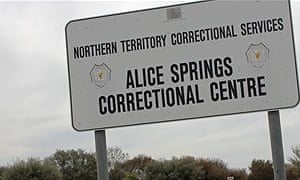 Following arrest, Mr Leo was remanded in custody and incarcerated in a high-security section of Alice Springs Correctional Centre, where he remained, unconvicted, for nearly 6 years. (image: Emma Sleath/ABC Local)