The State party is under an obligation to provide the author with an effective remedy.

The State party is also under an obligation to ensure that similar violations do not occur in the future. 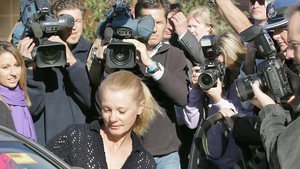 This Russian-Australian librarian and former judge’s associate denies she was the woman who, in 1999, assisted a convicted bank robber to escape prison by hijacking a helicopter during a joy-ride over Sydney Harbour and forcing the pilot at gun-point to land in the exercise yard of the prison. Ms Dudko does not deny she was apprehended with the fugitive six weeks later. She was tried and sentenced to ten years’ gaol.

Ms Dudko’s principal human rights complaint concerned the media frenzy and public comments by judiciary and police, which she believes prejudiced her trial. Before the verdict was handed down, a judge ‘who had no involvement in the author’s case, gave an interview to the Daily Telegraph newspaper in which he effectively declared that the author had committed the offence’. Also, Ms Dudko was denied the right to attend a High Court appeal, at which she was representing herself due to an inability to obtain Legal Aid.

The HRC rejected her article 14(1) claim concerning pre-trial publicity as inadequately substantiated, but found a breach of the same provision, namely her right to a fair trial and equality before the law, which includes the right to be present in person during a criminal appeal. The HRC said Australia should provide Ms Dudko with an unspecified remedy. No remedy has been forthcoming.